Let the voice be heard

Published on Friday, June 8, 2012
Dear users,
after several months of hard work, we are proud to announce to the world that our new SEO routing engine for ASP.NET MVC has been officially released! We even provide a free edition which comes at no cost, so this is something you can't really miss if you are a serious ASP.NET developer. ;)

Cobisi SEO Extensions - this is the name of the product - is an advanced tool for software developers that allows to optimize ASP.NET MVC web applications and sites for search engines. It comes with a powerful routing engine, which extends the standard ASP.NET routing module to provide a much more flexible way to define search optimized routes, and a complete set of classes that make customizing the entire routing infrastructure very easy and cool.
In its simplest form, defining a route for an MVC action is just a matter of decorating the method with the [Route("...")] attribute and specifying the desired URL. The library will take care of the rest and set up the route accordingly; while coding routes this way, Cobisi SEO Extensions also shows how the final routes will be, without leaving the Visual Studio IDE!

In fact, Cobisi SEO Extensions integrates with the Visual Studio IDE to offer a large set of time-saving improvements targeted at ASP.NET developers. A new tool window, for example, allows to easily browse among the routes exposed by your applications, being them standard ASP.NET routes, MVC specific routes or SEO routes. The routes can be easily filtered on the fly, to ease finding the ones you are interested in. Double clicking a SEO route will even open the related ASP.NET MVC controller, at the beginning of the specified action method.

In addition to that, Cobisi SEO Extensions allows to easily understand how each SEO route is composed by showing the routing model details directly in the IDE, beneath each MVC action route. 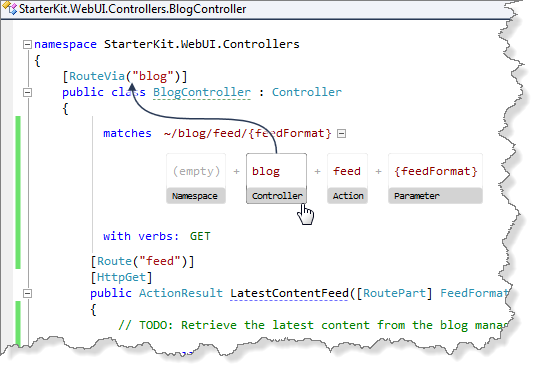 Furthermore, Cobisi SEO Extensions helps developers to easily recognize which class is an MVC controller and which methods is an MVC action by drawing a special dashed underline mark under each items of these categories.

We are really eager to receive your feedback and suggestions - please feel free to ping us with your comments! Thank you!